The family of Dendrobatidae (poison dart frogs) is well known in French Guiana, thanks in particular to the dyeing dart frog (Dendrobates tinctorius), because it is not unusual to see one on the reserve trails. But this month, the small dendrobate is honoured: Ranitomeya amazonica. It is much smaller (1.5 cm for adults) and not unusual to observe it in the armpit of a bromeliad. These small amphibians use water that is retained to lay their eggs and raise their tadpoles. It alerts, too, its predators of its toxicity, using its bright colours.

You can observe this frog around our new entrance building of the reserve. Bromeliads surrounding it provide an ideal habitat for these small dendrobates! 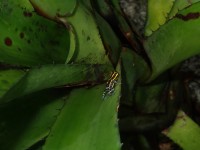 R. amazonica iinspecting its territory: one of the bromeliads at the parking © Benoit Villette 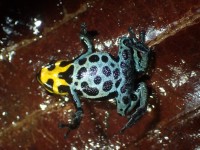 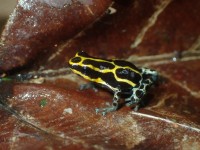 An adult male transporting one of its tadpoles © Benoit Villette

Eggs laid on a leaf of a bromeliad © Benoit Villette