Spread over nearly 2,500 hectares of the southwestern flank of the mountain of Kaw, the regional nature reserve (RNR) Trésor lays between a provincial road uphill and the Orapu River downhill.

Overlooking the vast coastal marshy plain, the mountain of Kaw forms the first obstacle that ocean trade winds meet when arriving at the continent. Clouds carrying oceanic moisture form and accumulate, which causes precipitation. These particular topographical conditions make this region one of the wettest areas of French Guiana. The average rainfall at Trésor exceeds 4 meters of water per year.

This peculiarity gave the Kaw-Roura-Regina region an important role as refuge area for many species during glacial periods, when the climate of the Guiana Shield was much drier and forest cover had reduced to a minimum. This role as refuge area has now resulted in high biodiversity and high endemism.

Despite its relatively small size, especially with regard to the size of most other nature reserves in French Guiana (the nearby swampy Kaw-Roura Reserve stretches over 90,000 hectares), the Trésor reserve is home to an astonishing biodiversity. The combination of physical (relief), edaphic (soil type) and hydrological (water accumulation) factors has shaped the reserve into a mosaic of different environments, ranging from swamp forests on mountain slopes – through a lowland forest interspersed with moist savannah and isolated patches – to swamp forests bordering the Orapu River.

Each of these ecological units with well-defined characteristics has its own retinue of species involved in the overall wealth of the regional nature reserve Trésor. 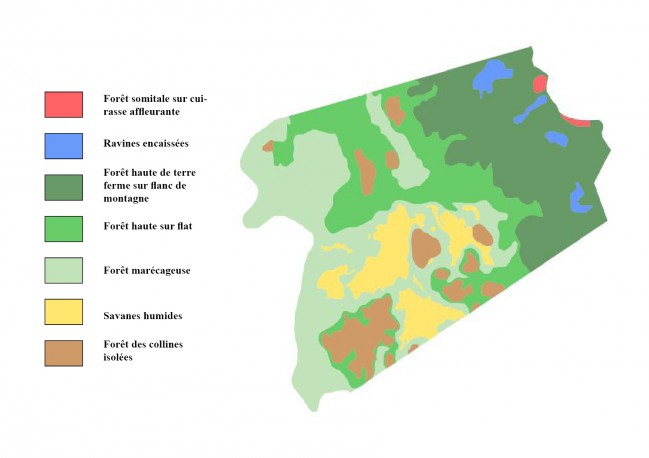 Covering most of the reserve, especially the mountain part and the flat area at his feet, high forests on drained soil contain the highest amount of animal and plant species. The canopy towers to thirty meters above the ground, from where occasionally majestic trees up to 50 meters emerge. Under the forest canopy, structures of lateritic rocks are sometimes found, forming cliffs and caves. In the ravines of the foothills of the mountain, coves slowly form and gradually expand into the lower parts of the reserve.

Swamp forests are primarily concentrated on a broad band in contact with the Orapu River. It is a forest of which the floristic composition is strongly conditioned by regular periods of flooding due to the dynamics of the tides and the rainfall. So, these plant species have developed special strategies to survive in waterlogged soil. Some emblematic species grow in these environments such as rare Anaphyllopsis americana, the Trésor emblem, and a protected mahot endemic to northeastern Guiana, Lecythis pneumatophora. 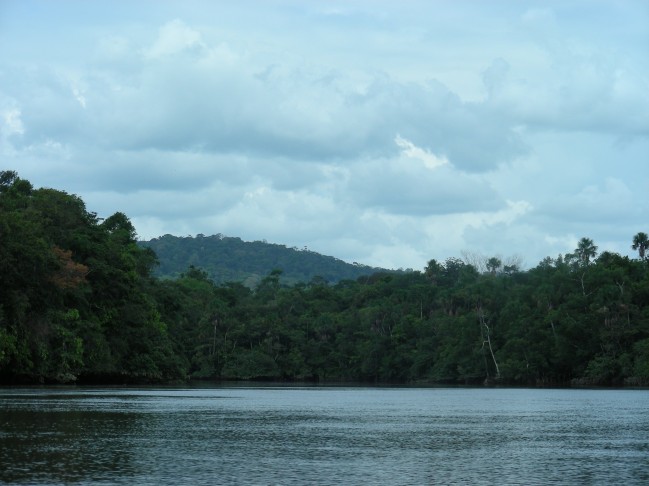 One of the great features of the Trésor reserve is the presence of a network of savannahs. These open herbaceous environments contrast sharply with the surrounding wooded area. Because of their originality, biodiversity that is strictly subservient to French Guianese savannahs is awarded a very specific focus.

Wet savannahs are rare and extremely endangered ecosystems in French Guiana. By themselves, they house 20% of protected plant species as they cover only 2% of the territory. Subjected to extreme human pressure on almost the entire region, Trésor’s savannahs are characterised by their good preservation and incredibly increasing the heritage value of the site.

Despite their insular appearance, they feature not only a specific flora, but also a very specific fauna, since the surrounding forest cover isolates them. Among them are reptiles (grass anole Anolis auratus and red-footed tortoise Chelonoidis carbonaria), amphibians such as tree frogs (many-banded tree frog Hypsiboas multifasciatus, polka-dot tree frog Hypsiboas punctatus and savannah scinax Scinax nebulosus) present only in the open areas. Also note the presence of the Black Manakin (Xenopipo atronitens), since Trésor is the only reserve in French Guiana where it is found. For plants, one will essentially find species of small size, like carnivorous plants Drosera and Utricularia. These genera are well represented in these environments. 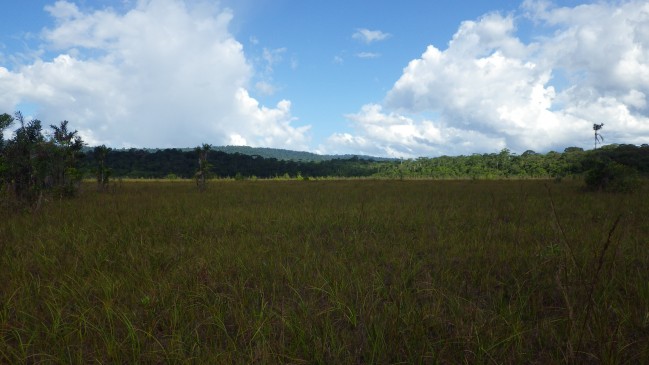 Small forest-covered hills are scattered on the lower parts of the reserve and are isolated from each other by swamp forest and savannahs. Their floristic composition usually remains similar to the high forests of the Kaw Mountain and we find the same rare species as in the high mountains. This is the case for species of kwali (e.g. Vochysia neyrati) and some palms (e.g. Astrocaryum rodreguiseii).

Based on excavations in similar areas not far from the reserve, these hills were home to Amerindian populations and later colonial houses including the exploitation of rosewood and the production of certain desirable species, such as cocoa, coffee and achiote.