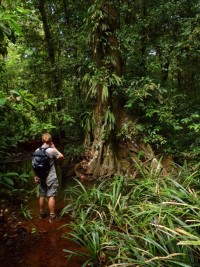 One of the missions in the management plan of the Trésor reserve is the acquisition of knowledge about its natural heritage. Inventory and monitoring of flora and fauna are the basis of this work, and that goes hand in hand with a thorough knowledge of the ecosystems that house the studied species.

Aquatic habitats are some of these ecosystems that house many forms of life. Whether bright or stagnant, permanent or temporary, all water bodies in the reserve are to be carefully mapped and studied by the team of the reserve. After all, they are the living place of many animal and plant species.

One of the first observations following these surveys is that the river routes prove to be very different in reality from those presented on detailed maps of low areas of the reserve, released by the IGN (Institute National de l’Information Geographique et Forestière). We are revising this hydrological network. It turned out, for example, that the single Passany Creek on IGN maps, actually consists of two independent major watersheds (named Favard Creek and Rock Creek).

Revised map of the hydrological network of the Trésor reserve