Study on the avifauna

The avifauna of the reserve has always been a subject awarded with special attention of the reserve team. In addition, amateur birding communities are well represented in French Guiana and they also research the Kaw Mountain area. The avifauna in the Trésor reserve is recognised as a privileged site for the observation of many special birds, making the birds in the reserve (particularly around the botanical trail) well known today.

It was during a program, launched in 2007 and initiated by RNR Trésor and several bird organisations, that ornithological research made a big jump by adapting a study coming from France: Temporal Monitoring of Common Birds (STOC in French). It allows on the one hand studying the dynamics of bird communities in time and, on the other hand, providing many pieces of information on ecology and identification of many species that were previously clearly lacking in French Guiana (criteria for sex, age, breeding period, biometrics). 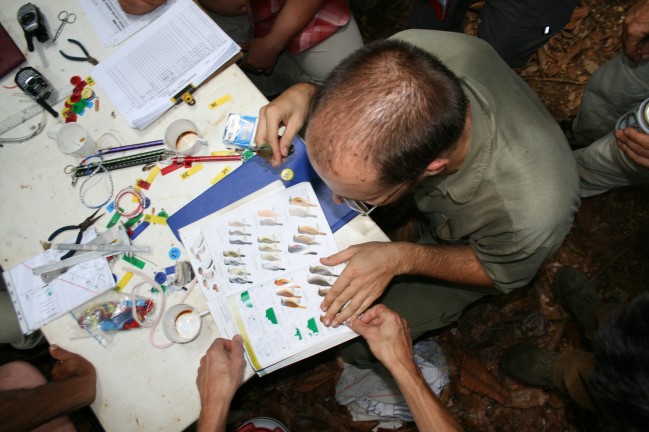 The operation took place from 2007 to 2010 with one session every two months. The site chosen for the study is located in a part of the rainforest that is on the top part of the reserve. At each session, 40 nets distributed at regular intervals over 4 hectares allowed the capture of birds in the undergrowth. A ring was placed on each first capture of a specimen and it was measured, examined, recorded and released. This technique, allowing individual identification, brings a whole series of additional information in the case of recapture.

The initial monitoring is completed and, presently, efforts are focused on the analysis of the huge amount of data accumulated during these three years. Today, the project continues less intensively. However, the continuation of the work on ecological data and species morphology is, of course, very valuable. STOC Trésor has also enabled the establishment of similar programs in other areas of French Guiana.

If the ornithological inventory on the site would be coming to an end after intense exploring activities in previous years, it is imperative to continue to gain knowledge on the status and ecology of the species.

The STOC program and its follow-up envisaged focus on a procession of specific species, mainly passerines of the undergrowth of primary forest. The studies of kilometre abundance indices (see Large Wildlife Monitoring) provide important data on species that subject to excessive hunting pressure, such as Agamis, Tinamous and Cracidae. The health of these groups will demonstrate the positive effect of the reserve.

The black manakin (Xenopipo atronitens) is a large piprid, subservient to the edge of open space areas. It is divided into localized patches throughout the Amazon basin. However, his secretive habits, his uniform and dark plumage and a place of life difficult to prospect, make it an enigmatic bird whose biology remains unknown throughout its range.

In French Guiana, the species has until today only been confirmed in nature reserve Trésor, despite surveys done in similar habitats. The few contacts took place mainly along the savannah. For the next 5 years, the team manager wishes to establish a study and monitoring program to acquire additional knowledge about its ecology and occupancy by the species in the mosaic of open areas of the reserve.

Material of an ornithologist © RNR Trésor